Of Blood and Ashes
Of Cinder and Bone Book 2
by Kyoko M
Genre: SciFi Fantasy Romance

The world’s deadliest dragon, the infamous Baba Yaga, is loose on the
streets of Tokyo.
Dr. Rhett “Jack” Jackson and Dr. Kamala Anjali have been tasked
with helping the government take down a dragon the size of a
Tyrannosaurus Rex after it sends part of the city up in flames.
Things worsen when they lose track of dragon in none other than
Aokigahara, the Suicide Forest–a section of woods in Japan that is
rumored to be one of the most haunted places on earth. They’ve also
got the yakuza who cloned the dragon hellbent on getting her back,
and they don’t care who they kill in order to re-capture the dragon.
Jack and Kamala are joined by CIA field agent William Fry and
dragon-hunting expert Juniper Snow as they infiltrate the forest to
hunt the dragon before she can hurt anyone else. Between the ruthless
yakuza hot on their trail and the growing mistrust in their small
hunting party, it will take a miracle for Jack and Kamala to make it
out alive…
Of Blood and Ashes is the second book in the series, following the
Amazon bestselling Of Cinder and Bone.
Goodreads * Amazon

What made you decide to be an author?

I always joke that I bleed words, but it’s completely true. I’ve been writing since I was old enough to hold a pencil. I was writing my thoughts out, much like an even tinier version of Harriet the Spy, and then by the time I hit late elementary/early middle school, I was writing little stories and fanfiction on a frequent basis. It wasn’t until college that I even gave it a single thought as something I wanted to do with my life. I went to a lecture at my university that was put on by alumnus Jackson Pearce, and she talked about publishing novels, and that was when I realized that I could actually turn what I’d been doing as a hobby into a career.

I love the act of creation. I love that there are no limitations in writing except for your own knowledge and imagination. I love being able to imagine entire universes and the interesting people that populate them. It’s intoxicating, honestly.

I hate editing. I hate the fact that I have constant crushing self-doubt about every book that I write. I hate it when I run into a brick wall because something in the story isn’t right and I have to sit there and figure out how to climb over that wall and continue writing.

How do you think your life experiences have prepared you for writing?

I’m an extremely awkward person in real life. People who know me can vouch for this, and it’s so hard for me to make friends because I have near-crippling social anxiety. Writing is the act of exposing yourself. It forces you to be honest and to share yourself with other people, but in a less stressful environment and in a more veiled sort of way. Life has shown me what really matters in my writing. For instance, I usually find common themes in my books like the importance of cobbling together a support system, or how the biggest monsters of all aren’t always dragons and demons, but awful human beings instead. I’ve also learned how to discipline myself thanks to a rigorous college education and to know when I have time to goof off and when I have to be serious and hit my deadlines.

Have you ever felt as if you were being dictated to while you wrote a book–as if the words came of their own accord? If yes, which book did that happen with?

Definitely. Often when I start a writing session, the goal is to simply finish the scene or the chapter. I start at Point A and by the end of the session, I need to be at Point B. Sometimes I have a rough idea of what will happen, but most of the time, the words gush out of me and things spring out of my brain and onto the page before I even comprehend them. It happened just the other day while I was working on the sequel to Of Cinder and Bone, as a matter of fact. I was having a good old time writing some banter and then some guy with an Uzi just waltzed into the story and I was just as surprised as my protagonists.

Know what your “alert” hours are. When I was in college, I used to write at night, since I was in class all day long. Now that I’m a working adult, I do evening shifts at my day job, so now I always write in the morning or before sundown because my body shuts down for relax mode once the sun goes down. If you know your own rhythms, writing becomes much easier and much more productive.

Are you a plotter or a pantser, i.e., do you outline your books ahead of time or are you an “organic” writer?

I am half-and-half. For instance, I always know where the novel will start and where it will end. I also know large plotpoints and character development moments that will happen. Everything between start to finish, however, is by the seat of my pants. My brain doesn’t seem to work in outlines. I actually don’t outline until the halfway point of the novel and that’s only to start a timeline so that I know the sequence of events.

If you had one take away piece of advice for authors, what would it be?

Don’t quit. It’s so enticing to give up, especially if you’re a newbie author in the self-publishing world. It feels like no one cares about you and no one’s willing to help you and there are no readers out there interested in your work. Push through it. Learn everything you can that works and listen to the advice of the authors who are genuinely trying to help you out. That’s the only way you’ll make it in the long run.

Did music help you find your muse with this book? If yes, which song did you find yourself going back to over and over again as you wrote?

Absolutely. Every book I write has its own soundtrack. Of Cinder and Bone was one of the first where I actually went on Youtube and created a little playlist to put me in the mindset of my characters. I’d say the main songs would be “Silly” by Deniece Williams, “S.O.B” by Nathaniel Ratecliff and the Night Sweats, and “I Wanna Get Better” by The Bleachers. 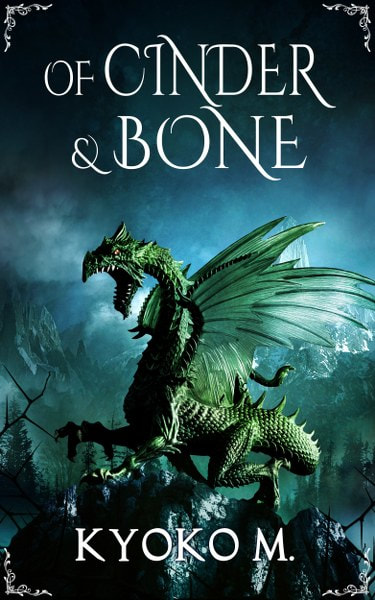 OF CINDER AND BONE is Ron Howard’s Ransom meets
Michael Crichton’s Jurassic Park!
After centuries of being the most dangerous predators on the planet,
dragons were hunted to extinction. That is, until Dr. Rhett “Jack”
Jackson and Dr. Kamala Anjali cracked the code to bring them back.
Through their research at MIT, they resurrected the first dragon
anyone has seen alive since the 15th century. There’s just one
problem.
Someone stole it.
Caught between two ruthless yakuza clans who want to clone the dragon,
Jack and Kamala brave the dangerous streets of Tokyo to steal their dragon
back in a race against time before the world is taken over by
mutated, bloodthirsty monsters that will raze it to ashes.
Of Cinder and Bone is an all-new sci-fi thriller from the author of the
Amazon bestselling Black Parade novels. Don’t miss out on this
explosive first-in-series! Fans of Westworld, I Robot, Pacific Rim,
and Reign of Fire will fall in love with this mashup novel that opens
up a whole new world of possibilities into what we know and love
about dragons.
**FREE at Amazon and Smashwords!!**
Add to Goodreads
Amazon * Smashwords

Kyoko M is a USA Today bestselling author, a fangirl, and an avid book
reader. She has a Bachelor of Arts in English Lit degree from the
University of Georgia, which gave her every valid excuse to devour
book after book with a concentration in Greek mythology and Christian
mythology. When not working feverishly on a manuscript (or two), she
can be found buried under her Dashboard on Tumblr, or chatting with
fellow nerds on Twitter, or curled up with a good Harry Dresden novel
on a warm Georgia night. Like any author, she wants nothing more than
to contribute something great to the best profession in the world, no
matter how small.
Website * Facebook * Twitter * Amazon * Goodreads

Follow the tour HERE
for exclusive excerpts and a giveaway!