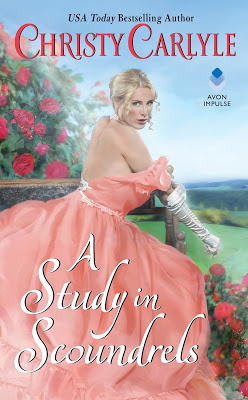 Can this scoundrel convince a proper lady that he’s
actually perfect for her
or will their adventure leave them both heartbroken?
A STUDY IN SCOUNDRELS
Romancing the Rules #2
Christy Carlyle
Releasing April 11th, 2017
Avon Impulse

Sophia Ruthven is the epitome of proper behavior. On
paper at least, as long as that paper isn’t from one of the lady detective
stories she secretly pens. She certainly isn’t interested in associating with
the dashing Jasper Grey, the wayward heir to the Earl of Stanhope, and one of
the stage’s leading men. But when she learns Grey’s younger sister Liddy has
gone missing, she can’t deny her desire to solve the mystery…or her attraction
to the incorrigible scoundrel.Responsibility isn’t something Grey is very familiar with. On the boards and in
the bedroom, he lives exactly how he wants to, shunning all the trappings of
respectability and society. Grey knows he should avoid the bewitching Sophia,
but he’s never been able to say no to what he wants. And having Sophia in his
arms and his bed is quickly becoming the thing he wants the most.

As Sophia and Grey’s search for Liddy continues across the English countryside,
can this scoundrel convince a proper lady that he’s actually perfect for her or
will their adventure leave them both heartbroken?

How to Write a Scoundrel in Five Steps

Make him a renegade. Every scoundrel is, in some sense, a renegade. He does not conform to society’s rules. Whether he’s a viscount or a valet, a scoundrel doesn’t give a fig what others think of his outrageous behavior. In fact, he relishes his rebellion and the effect he has on others. To shock a virginal debutante into a blush. To send a society matron searching for her smelling salts. To make a rival livid with disdain. Those are the moments a scoundrel lives for. Even if he’s meant for ultimate redemption (and, of course, he is), a true scoundrel always starts as a rule breaker.

Infuse him with magnetism. A scoundrel must draw you, tantalize you, no matter how much of a rogue he is. A scoundrel should wield a kind of magnetism that’s impossible to deny. A magnetism based on more than his charm, handsome features, and appealing physique, though it helps if he possesses those in spades. Yet even a scarred, flawed scoundrel intrigues the most proper heroine, exuding a charisma that makes her curious enough to look beyond his reputation and bad behavior. When I think of the magnetic scoundrel, Lisa Kleypas’s Derek Craven from Dreaming of You comes to mind. From his first appearance on the page, he exerted a magnetic pull on me, as a reader, and on Sara, the story’s heroine.

Turn up the confidence. Scoundrels rarely regret their sins. At least at first. To be a true scoundrel, a man must revel in his naughtiness for a while. One of the keys to being a successful scoundrel, after all, is acquiring a terrible reputation, and it takes effort to convince everyone around you that you’re an unprincipled man. Part of a scoundrel’s appeal lies in his confidence, whether in his looks, his charm, or some skill that he performs particularly well. And, no, I’m not only thinking of talents in the bedroom. Consider Han Solo, the Star Wars scoundrel we all love. Han may have suspected Leia’s feelings for him, but he knew with absolute certainty that he was one of the best pilots in the galaxy. Confidence is sexy, and scoundrels have plenty.

Dig into his history. He may be the life of the party. Embracing every sin. Indulging every impulse. But the best scoundrels have a history that’s far less about pleasure than their lifestyle would suggest. Often there’s a wound, a trauma, some deeply buried regret that they seek to block out with hedonism and sensual gratification. He can’t escape his past, of course, no matter how much he carouses. My hero, Jasper Grey, in A Study in Scoundrels has never quite gotten past the death of his brother. His guilt is what drives him to overindulge and embrace his role as a scoundrel.

Give him a formidable challenge. Every hero is presented with a challenge. Part of the appeal of a scoundrel is that he usually faces provocation with gusto. Whether he schemes to avoid marriage, or attempts to outwit a clever heroine, a scoundrel never backs down from a dare. Challenge intrigues him, excites him. Probably because his overconfidence convinces him he’ll always emerge the victor. Of course, a challenge often alters the scoundrel in ways he doesn’t expect, especially if confrontation comes in the form of a fierce, smart, determined heroine who strips away his seductive veneer and digs deep enough to unearth the man inside. 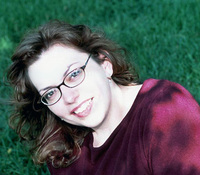 Fueled
by Pacific Northwest coffee and inspired by multiple viewings of every British
costume drama she can get her hands on, USA Today bestselling
author Christy Carlyle writes sensual historical romance set in the
Victorian era. She loves heroes who struggle against all odds and heroines who
are ahead of their time. A former teacher with a degree in history, she finds
there’s nothing better than being able to combine her love of the past with a
die-hard belief in happy endings.