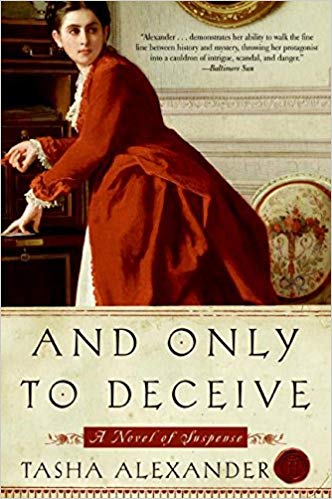 For Emily, accepting the proposal of Philip, the Viscount Ashton, was an easy way to escape her overbearing mother, who was set on a grand society match. So when Emily’s dashing husband died on safari soon after their wedding, she felt little grief. After all, she barely knew him. Now, nearly two years later, she discovers that Philip was a far different man from the one she had married so cavalierly. His journals reveal him to have been a gentleman scholar and antiquities collector who, to her surprise, was deeply in love with his wife. Emily becomes fascinated with this new image of her dead husband and she immerses herself in all things ancient and begins to study Greek.

Emily’s intellectual pursuits and her desire to learn more about Philip take her to the quiet corridors of the British Museum, one of her husband’s favorite places. There, amid priceless ancient statues, she uncovers a dark, dangerous secret involving stolen artifacts from the Greco-Roman galleries. And to complicate matters, she’s juggling two very prominent and wealthy suitors, one of whose intentions may go beyond the marrying kind. As she sets out to solve the crime, her search leads to more surprises about Philip and causes her to question the role in Victorian society to which she, as a woman, is relegated.

And Only to Deceive is a really nice introduction to a new mystery series. Lady Emily is a likable and believable (something sorely lacking in many historical novels) Victorian heroine. The mystery is interesting, but quite slow. It is probably about half-way through the book that Emily begins to understand there even is a mystery to be solved. Some readers of mystery books might find that frustrating, but I think it was appropriate for a first novel. There is a lot of character and world building in this book. Hopefully future installments will move at a quicker pace.

There is a bit of romance but not too much, even though there are basically three romances happening at once. The most interesting one is Lady Emily’s growing affection for her late husband. It is an interesting but frustrating storyline because you enjoy the budding romance but know it can only end in heartbreak…or can it?

I really enjoyed the wide range of female characters presented in addition to the heroine. Ivy is a good example of what was expected of a Victorian wife while Margaret contrasts the freedoms afforded to American women of means. Lady Emily is somewhere in the middle, trying to navigate a world of set standards that she really doesn’t fit into after being widowed so young.

The book was good enough that I happily downloaded the complete series and it will hopefully keep me entertained until the next installment of Victoria Thompson’s Gaslight series comes out in November.

Have you read And Only to Deceive? What did you think?