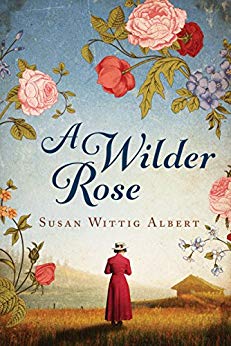 This weekend, I devoured A Wilder Rose by Susan Wittig Albert. I think I started it on my Thursday morning commute and finished it by Sunday night. I loved it for many reasons and highly recommend it.

The Little House books, which chronicled the pioneer adventures of Laura Ingalls Wilder, are among the most beloved books in the American literary canon. Lesser known is the secret, concealed for decades, of how they came to be. Now, bestselling author Susan Wittig Albert reimagines the fascinating story of Laura’s daughter, Rose Wilder Lane, an intrepid world traveler and writer who returned to her parents’ Ozark farm, Rocky Ridge, in 1928. There she began a collaboration with her mother on the pioneer stories that would captivate generations of readers around the world.

Despite the books’ success, Rose’s involvement would remain a secret long after both women died. A vivid account of a great literary deception, A Wilder Rose is a spellbinding tale of a complicated mother-daughter relationship set against the brutal backdrop of the Great Depression.

I picked up the book because I was very interested in reading Pioneer Girl, the annotated autobiography of Laura Ingalls Wilder that was also released this year, but it is quite expensive and not available on Kindle. I’m still interested in reading it, but mainly because I would like to see the differences in Laura and Rose’s points of view. I also picked it up because I grew up with the Little House books and they are one of the reasons I have always wanted to be a writer. So here are the reasons I loved this book:

There are probably more reasons why I loved this book, but this post is long enough. I hope those are enough reasons to convince you to pick it up. Long story short, 5 out of 5 stars.

Do you have a book you would like reviewed? I post reviews here and on Amazon and Goodreads. If you would like me to review your book (any genre), send me an email at LeighAndersonRomance@gmail.com.

Check out all my book review here.