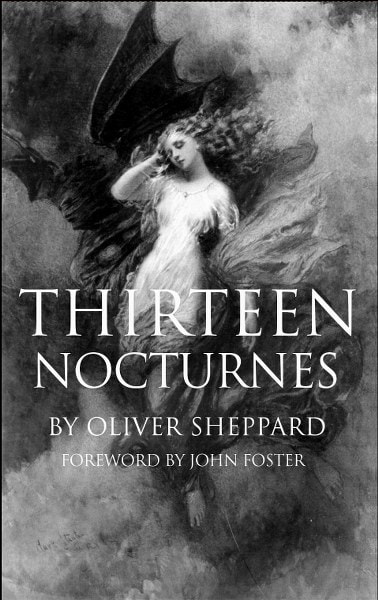 Combining lush Gothic lyricism with postmodern experimentation, Oliver Sheppard’s second collection of verse, Thirteen Nocturnes, presents a nightmare vision of a world in the grip of apocalypse and shadow–a world where “a nighttime of years never-ending” becomes “a darkness severe and unbending,” and where life is relentlessly “gathered up against the towering shadow of decay.” Taking cues from the dark Romanticism of Poe, the decadent Symbolism of Baudelaire, and the apocalyptic tradition of William Blake–as well as the existential doominess of 20th century cosmic horror–Oliver Sheppard’s Thirteen Nocturnes presents a verse vision of collapse, announcing a cold poetics of disintegration in the new dark age of the Anthropocene.
“Reading Sheppard’s poetry is a little like listening to a conversation between Nietzsche and William Blake during a showing of Peckinpah’s Cross of Iron. Using a wide range of forms and cultural references, Sheppard illustrates the human condition in ways that take as much account of its absence as its presence… Given the chance, Sheppard will lead you down dark and unfamiliar paths, to moments of weird beauty.” –from the foreword by John Foster
Goodreads * Amazon

Oliver Sheppard was born in Nashville, Tennessee, and lives in Texas. Critical reviews of his poetry collections have been kind: “Like listening to a conversation between Nietzsche and William Blake while watching Peckinpah’s ‘Cross of Iron’,” reviews of his first book, Destruction: Text I, claimed. Garnering accolades from academia and punk zines alike, Sheppard’s work takes cues from the cosmic fatalism of Lovecraft and Thomas Ligotti, and combines that with the lush, Gothic lyricism of the Dark Romanticist tradition.
“Sheppard’s THIRTEEN NOCTURNES is gothic in every sense of the word; from the writing style, the themes, to Oliver’s own influences. Without a doubt, this bountiful collection raises the bar for contemporary gothic poetry. It’s rare in this day and age to find poetry written in a manner as sophisticated and profound as this. But here, Sheppard combines a down-to-earth modernism with older styles that make for a fanciful and unique experience for the reader.”–Sar Blackthorn, CVLT Nation
Facebook * Twitter * Amazon * Goodreads

Follow the tour HERE for exclusive excerpts, teasers and a giveaway!
a Rafflecopter giveaway