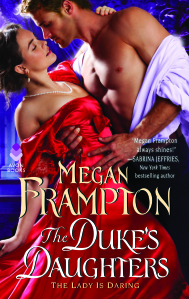 The duke’s five daughters have beauty, breeding, and impeccable reputations. Or at least, they did. Now that two have chosen to follow their hearts, can the others be far behind?

It was easy for society to overlook Lady Ida Howlett; they found her bookish, opinionated, and off the marriage mart. But little did they know that behind a calm exterior beats the heart of an adventuress, one who, determined to discover her runaway sister’s whereabouts, steals a carriage and sets off on a daring mission. Then she discovers she’s not alone! Bennett, Lord Carson, is inside, and he refuses to leave.

Lord Carson’s plans had always been to find a soft, gentle wife who would run his home and raise his children. Still, he makes a bargain with Ida—he won’t desert her during her mad adventure. He’ll make sure she’s safe, and then find a suitable lady to fall in love with. But when rules (and garments) become discarded during this long, intimate journey, it’s soon clear that this surprisingly daring lady is the woman he’s needed all along.

Lady is Daring
by Megan Frampton

In the course of revising The Lady is Daring, my editor suggested to model some of the action on a screwball comedy from the ‘30s, It Happened One Night. My editor and I share a love for old movies, so of course this was something that totally made sense to me.

I watched the film recently to revise, and it rekindled my love of screwball comedies—movies defined as “being characterized by a female that dominates the relationship with the male central character…the two engage in a humorous battle of the sexes, which was a new theme for Hollywood and audiences at the time.”

The Lady is Daring has some of those elements, including my know-it-all heroine, Ida, who definitely challenges Bennett, though he pushes back. Other elements common to screwball comedies are “fast-paced repartee, farcical situations, escapist themes, and plot lines involving courtship and marriage.”

In addition, It Happened One Night is a road romance, where the hero and heroine are stuck together even though neither one of them would choose to be with the other one. That is just like Ida and Bennett, who end up in a carriage traveling to a tiny town in England on the hunt for Ida’s runaway sister, Della. Ida insists that Bennett leave, but he is just adamant that he not, and so they strike an unlikely partnership.

In one of the most famous scenes in the film, Clark Gable’s character has been trying to flag down a ride (back when hitchhiking was legal). He is unsuccessful, so Claudette Colbert’s character wants to give it a try.

She uses her leg, not her thumb, and gets them a lift immediately.

One of the other famous scenes is when they share a room, and so Gable strings a blanket up to act as a barrier between their two beds, referencing “the walls of Jericho.” Ida and Bennett do the same thing, only Ida doesn’t honor the barrier, and then…things happen.

And the element that likely is the most obvious comparison between screwball comedies and my book (and my writing in general) is the witty repartee. Ida and Bennett talk A LOT during the course of the book, and eventually Ida realizes that not only is Bennett as smart as she is, he is also not intimidated by her intelligence (a very common theme in my books, I’ve come to realize).

Anyway, if you haven’t watched a screwball comedy, but would like to start, here are my favorites in alphabetical order:

His Girl Friday (the FASTEST dialogue in a movie ever, I think)

It Happened One Night

To celebrate the release of LADY IS DARING, we’re giving away one paperback set of LADY BE BAD and LADY BE RECKLESS by Megan Frampton!

GIVEAWAY TERMS & CONDITIONS:  Open to US shipping addresses only. Three winners will each receive a paperback set of Lady Be Bad & Lady Be Reckless by Megan Frampton. This giveaway is administered by Pure Textuality PR on behalf of Avon Romance.  Giveaway ends 10/8/2018 @ 11:59pm EST. Avon Romance will send the winning copies out to the winner directly. Limit one entry per reader and mailing address. Duplicates will be deleted. CLICK HERE TO ENTER!

MEGAN FRAMPTON writes historical romance under her own name and romantic women’s fiction under the name Megan Caldwell. She likes the color black, gin, dark-haired British men, and huge earrings, not in that order. She lives in Brooklyn, New York, with her husband and son.