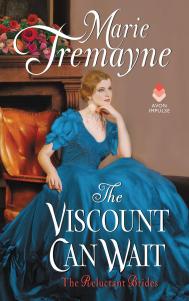 After five years away, Lady Eliza Cartwick isn’t relishing returning to the whirl of the London season. But the young widow knows to ensure the best future for herself and her young daughter Rosa, she must remarry. If only Lord Evanston, the dashing rogue who has haunted her dreams since she was sixteen, didn’t insist on distracting her with his searing looks and lingering touches at the most inconvenient times…

Thomas, Lord Evanston has wanted Eliza since her engagement ball all those years ago. His best friend’s sister has constantly been out of reach…until now. The forbidden has always tempted him, but when Thomas realizes he wants the object of his fantasies for far more than a dalliance, he must convince her that he’s not just a rake; he’s a viscount who’s worth the wait.

The Viscount Can Wait
by Marie Tremayne

My definition of true literary success means having a loyal fanbase with readers who search for my name when they want to find a good book.

I think themes are great. Of course, I’m partial to The Reluctant Brides, but Lisa Kleypas’s The Wallflowers is another good example. A titled theme gives you a little hint of what to expect, and as a reader, I know it’s an idea that will be revisited in different ways throughout the series.

I do all kinds, usually at the same time I’m mapping out the plot. The whole process takes anywhere from two weeks to a month, depending on how familiar I am with the subject matter, and the researching never really stops. I’ll go to the library or dig into the internet when I’m writing if I must, but more often I’ll make a note to figure out that detail later and keep writing. Research can be its own little rabbit hole sometimes.

It does almost feel spiritual when you create something out of nothing. And when I’m struggling, there is something to be said for pushing through those obstacles to emerge on the other side. It can feel like a metaphor for life.

I suppose the difficult thing is making sure to articulate his thoughts in the way a man would think, not necessarily the way a 21st century adult female would…all while still making him relatable to 21st century adult females. One of the highest compliments I received for my first book was from my brother who told me how much he liked reading the hero’s perspective. I suppose I must have done something right!

I wrote part-time for two and a half years before switching to a more full-time commitment.

Generally, I dedicate anywhere from 3-5 hours a day to writing. If I’m writing new material I’ll set a 1,000 word goal and keep plugging away until it’s done. Edits are another story entirely, and fall somewhere in that 3-5 hour range unless I’m heading into deadline territory, then all bets are off.

I tend to write about the early to mid-adult years most often.

Initially I took out a touching scene between Thomas and Rosa toward the beginning of the book. Funny enough, I ended up adding it back in because after making some other tweaks to Thomas’s character because I really needed to show that he did have that connection with her.

Have you read anything that made you think differently about fiction?

When I was twenty-one, Pride and Prejudice changed my notion of what I thought I would find entertaining. My friend brought me a copy when I was sick in bed, and while I’d scoffed at the book initially (it was old!), I ended up glued to every page until that book was done. Then I read it again. It changed the course of my college education, and it even changed the course of my life.

What are the ethics of writing about historical figures?

My characters are fictional, but I will reference a historical figure on occasion. I feel obligated to keep things accurate if I’m using them in a factual context. If I were writing historical fiction based in an alternate reality, I think there could be more freedom as long as the boundaries of that dimension were clearly established.

How do you select the names of your characters?

I like to use names that were actually in fashion during the Victorian era, so I look up records and lists of common names. Sometimes I’ll make a twist on a relative’s name, or I might see a name during my day that inspires me.

If you didn’t write, what would you do for work?

I would likely be teaching—in fact, that was initially my plan with the English degree. But I have no complaints about how things turned out.

Do you read your book reviews? How do you deal with bad or good ones?

I do read reviews, although sometimes I have to stop myself especially if I am actively writing my next book. A bad review can really mess with your head and send you into a tailspin of doubt, but I have found the feedback can be useful when presented constructively.

Do you hide any secrets in your books that only a few people will find?

Hmm. Well, residents of the Greater Seattle area may find that my heroes’ titles are often named after the more eloquent-sounding city streets…

What was your hardest scene to write?

There is a scene in VISCOUNT where a character is being cared for medically, and I tried really hard to convey what that scene was like from multiple perspectives while keeping things realistic. It was definitely a challenge.

Do you Google yourself?

At the risk of sounding a little dirty, yes! I Google myself often.

What one thing would you give up to become a better writer?

It would have to be television. I don’t watch a ton of it to begin with, but sometimes watching one show can evolve into binge-watching an entire season.

What is your favorite childhood book?

I’d say it’s a tie between Scuffy the Tugboat and The Poky Little Puppy. Loved those Little Golden Books.

What is the most difficult part of your artistic process?

The initial plotting can take some time. Often, I have the general idea, turning points, etc., but the little intricacies are harder to pin down. This is where a plotting party with fellow author friends can really come in handy. And editing can also be a challenge since I find modifying things on the page more difficult than writing it fresh.

Does your family support your career as a writer?

Yes! In fact, they are my most rabid fans.

If you had to do something differently as a child or teenager to become a better writer as an adult, what would you do?

If I could do something differently, I’d think of myself more seriously as a writer and stick my neck out a little sooner. I always worried about being judged for my creative writing and it kept me from taking chances.

How long on average does it take you to write a book?

It takes roughly six months to write one book, although there can be little delays if I’m going back to complete edits on an earlier book at the same time.

Do you believe in writer’s block?

Yes, absolutely. For me, it’s often a sign that I’m distracted in another area of my life, or that I’m having trouble finding a comfortable spot to write. The Viscount Can Wait was written mostly from the backseat of my car. And for times when I was really stuck, I would meditate or go for a walk…get out of my head so I could get back down to business.

To celebrate the release of THE VISCOUNT CAN WAIT by Marie Tremayne, we’re giving away three paperback copies of Lady in Waiting!

GIVEAWAY TERMS & CONDITIONS:  Open to US shipping addresses only. Three winners will each receive a paperback copy of Lady In Waiting by Marie Tremayne.  This giveaway is administered by Pure Textuality PR on behalf of Avon Romance. Giveaway ends 10/26/2018 @ 11:59pm EST. Avon Romance will send the winning copies out to the winner directly. Limit one entry per reader and mailing address.  Duplicates will be deleted.  CLICK HERE TO ENTER!

MARIE TREMAYNE graduated from the University of Washington with a B.A. in English Language and Literature. While there, a copy of Pride and Prejudice ended up changing her life. She decided to study the great books of the Regency and Victorian eras, and now enjoys writing her own tales set in the historical period she loves. Marie lives with her family in the beautiful Pacific Northwest.