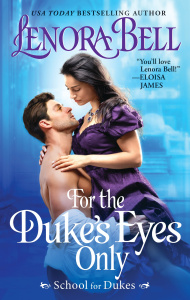 If adventure has a name…it must be Lady India Rochester. The intrepid archaeologist possesses a sharp blade and an even sharper knack for uncovering history’s forgotten women. Unfortunately, she has one annoying weakness: the dangerously handsome Duke of Ravenwood. Former best friend. Current enemy. And the man who dared to break her heart.

Daniel Bonds, the Duke of Ravenwood, is a thrill-seeking antiquities hunter who only plays by one rule: Never fall in love. He’s in it for the fortune and glory. At least that’s what he wants the world to think. He’s sworn to hide his tangled web of secrets, especially from the one woman he cares about and will protect at any cost.

But when a priceless relic is stolen from the British Museum, the rivals must align forces. Racing to recover the stolen antiquity and avert an international disaster? All in a day’s work. Avoiding their buried feelings? More and more impossible. For love is about to become the greatest treasure of all. The grand adventure begins…now!

For the Duke’s Eyes Only
by Lenora Bell

Series
School For Dukes (Each book is a standalone story.)

Purchasing Story Genius by Lisa Cron. I can’t say enough good things about this book. It literally changed my life.

What authors did you dislike at first but grew into?

I’m not a fan of horror so I never read a Stephen King book while I was growing up. But then I met my husband and he’s a huge horror movie and literature buff so I decided to try some Stephen King and I ended up liking his books. I also love On Writing, his memoir filled with advice for writers. I did go to see the new version of It but I had to leave halfway through – it was just too scary for me.

What did you do with your first advance?

I bought Mr. Bell a motorcycle. He has supported my dream of becoming a writer from day one.

What was an early experience where you learned that language had power?

I was such a huge bookworm growing up that I would stay up reading late into the night and I never wanted to get up and go to school the next day.

What are the most important magazines for writers to subscribe to?

I always look forward to receiving my monthly magazine from RWA featuring news, advice, and resources for romance writers!

How do you balance making demands on the reader with taking care of the reader?

I want to wrap readers up in a joyful blanket and make them laugh, cry, sigh, and swoon!

As a writer, what would you choose as your mascot/avatar/spirit animal?

With a name like Lenora, I have to go with a raven because of the Poe poem. I have a raven surrounded by wild Alaskan roses tattoed on my back.

What do you owe the real people upon whom you base your characters?

I don’t base my characters on any one person—they are amalgamations of people I’ve met, read about, or imagined.

How many unpublished and half-finished books do you have?

I have at least four half-finished books on my harddrive and two finished novellas. Most of them are from participating in NaNoWriMo (National Novel Writing Month). It’s such a great way to get words on the page!

Becoming a better writer with each book.

Being discovered by new readers is always an uphill endeavor and I’m very fortunate to be working with the fantastic publicity team at Avon Romance. They reach a much wider audience than I would be able to as a new author.

Historical romance novels always require a ton of research. I’ve been amassing a reference library stocked with books about 19th century London. Google Books helps so much because they’ve scanned so many texts from the time period. For the book I’m working on I needed to know the exact itinerary of a trip from London to Paris in 1829 and I found a travel guide published in 1828 that detailed not only the routes, but the timetables and fares as well.

I often incorporate spiritual rituals into my writing habits. Every few hours I’ll take a break and do yoga and meditation. I burn candles while I’m writing and use scented oils in a diffuser because candlelight and soothing scents help the creativity flow.

The difficult things is making each character vivid, believable, and three-dimensional. Every person we meet has unique physical attributes, mannerisms, quirks, and stories they choose to tell. Translating that to the page is what makes characters come alive.

I’m still a part-time writer with a day job. Luckily, I prefer to write at night because of the quiet and lack of distractions.

I try to write four hours per day when a story is in development. When I’m on the tail end of a deadline sometimes write up to twelve hours per day.

I like to incorporate details into my books from all the traveling I’ve done in the last decade. I used my experience visiting Peru in How the Duke Was Won, and I used my travels in Italy for If I Only Had a Duke. Right now I’m writing a book that’s partially set in Paris and I’m drawing from some recent trips to France.

A whole lot of extraneous “of course’s” “actually’s” and “oh’s.”

To celebrate the release of FOR THE DUKE’S EYES ONLY by Lenora Bell, we’re giving away a paperback set of the School For Dukes series thus far!

GIVEAWAY TERMS & CONDITIONS:  Open to US shipping addresses only. One winner will receive a paperback set of the School For Dukes series this far. This giveaway is administered by Pure Textuality PR on behalf of Avon Romance.  Giveaway ends 10/1/2018 @ 11:59pm EST. Avon Romance will send the winning copies out to the winner directly. Limit one entry per reader and mailing address. Duplicates will be deleted. CLICK HERE TO ENTER!

LENORA BELL is a USA Today bestselling, award-winning author of historical romances. She blames the long, dark winters in her tiny Alaskan hometown for making her a lifelong bookworm. A teacher with an MFA in Creative Writing who has lived on five continents, Lenora currently shares an old farmhouse in the Pacific Northwest with her carpenter husband and two tiger-striped rescue kitties. She loves to hear from readers!