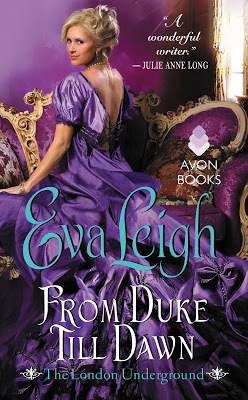 A seductive new series that sizzles with
the dark secrets of
London’s underworld…
FROM DUKE TILL DAWN
The London Underground #1
Eva Leigh
Releasing May 30, 2017
Avon Books

Eva
Leigh launches a seductive new series that sizzles with the dark secrets of
London’s underworld…
Years ago,
the Duke of Greyland gave his heart—and a princely sum of money—to a charming,
destitute widow with unparalleled beauty. But after one passionate night, she
slipped from his bed and vanished without a trace. And just when he’s given up
hope of ever seeing her again, Greyland finds her managing a gaming hell. He’s
desperate to have her… until he discovers everything about his long-lost lover
was a lie.
In truth,
Cassandra Blake grew up on the streets, picking pockets to survive. Greyland
was a mark—to be fleeced and forgotten—but her feelings for the duke became all
too real. Once he learns of her deception, however, the heat in his eyes turns
to ice. When her business partner absconds with the gaming hell
proceeds—leaving unsavory investors out for blood—Cassandra must beg the man
she betrayed for help.
Greyland
wants compensation, too, and he’ll assist her under one condition: she doesn’t
leave his sight until her debts are paid. But it’s not long before the real
Cassandra—the smart, streetwise criminal—is stealing his heart all over
again.

Describe yourself in five words or less. Feminist who believes in HEA.

Can you tell us a little about your book? Alexander Lewis, the Duke of Greyland, met a beautiful, destitute widow and lost his heart to her—but she disappeared. Two years later, the duke finds Cassandra again as she manages a gaming hell. Alex is prepared to offer Cassandra everything, even his name, until he discovers a gut-wrenching truth. Cassandra is not a genteel widow. She’s a confidence artist, targeting aristocratic men with her swindles. Heartbroken and furious, Alex wants nothing to do with her. Fate steps in when Cassandra’s business partner vanishes with the profits from the gaming hell, leaving Cassandra at the mercy of dangerous people. In desperation, Cassandra turns to Alex for help. Delving into London’s underworld, they form an uneasy partnership as they track down her partner. Yet the passion they’d shared two years ago is nothing compared to their desire now. Can Alex protect himself, or will Cassandra once again steal his heart?

How did you come up with the concept and the characters for the story? As with my Wicked Quills of London series, I enjoy having characters that aren’t necessarily part of Regency High Society. I’m fascinated by confidence artists—their methods, their motivations—and thought it would be exciting to see what would happen when England’s most morally upright duke falls for a morally ambiguous woman.

What did you enjoy most about writing this book? Exploring the other, shadier side of Regency London was a lot of fun. That time period is so rich with possibility, with so many people of many different walks of life all living in one place. I also really enjoyed having Alex learn to lighten up a little and free his wild side. Nothing like a buttoned-up guy who loosens the reins of his control. (It turns out Alex likes talking dirty!)

What do you like to do when you aren’t writing? Baking is one of my favorite things to do, because, unlike writing, you finish with a tangible result. Plus, you make something delicious. I read, of course, and spend too much time on the internet. When I’m feeling industrious, I crochet little soft toys called amigurumi and give them to friends.

Tell us all about your main characters—who are they? What makes them tick? Most importantly, what one thing would they need to have with them if stranded on a desert isle? 😉

Alex has been born and bred to be a duke. Everything he does falls within a strict code of responsibility and honor. He doesn’t fully understand degrees of morality. Having a brief, passionate affair with Cassandra two years ago was entirely out of character. Once she comes back into his life, he’s shocked and infuriated to learn that he was just another mark. He’s ready to write Cassandra off as a cold, calculating criminal—despite the fact that he still desires her. If Alex was stranded on a desert island, he’d need his walking stick. He doesn’t have an injury that requires it, but a walking stick can be a useful took for building shelters, using to hunt for food, or making it into a sundial. He’s a no-nonsense, practical guy!

Cassandra grew up alone on the rough streets of London. She had to learn how to survive in a brutal world. With no one to take care of her, she turned to crime as a way to keep from starving. Her life changed when she met a man who taught her the art of pretending to be a gentlewoman while swindling members of the gentry. Instead of sleeping on filthy hay, now she could rest her head on feather mattresses, and she had as much as she wanted to eat. She always thought of aristocrats as targets to be swindled, until she met Alex, who treated her with dignity and kindness. With Alex, she broke her rule of never sleeping with a mark, and later fled out of self-preservation. Cassandra is street wise, self-sufficient, and has learned to view everything with suspicion. Only Alex sneaks past her defenses. If she was stuck on a desert island, she’d be practical and take a small knife (which could also be used as a lock pick if she found buried treasure).

Do you have any advice to give to aspiring writers? Find a way to sit down in front of your computer and just start writing. Even when you doubt yourself, you have to keep going. It’s trite, but books really don’t write themselves. And also, enjoy the process of writing simply to write. Success isn’t a guarantee so we have to love what we do. 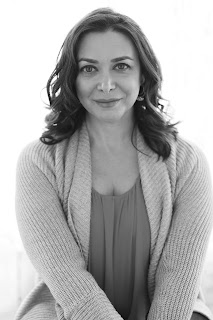 Eva Leigh is the pen name of
a RITA® Award-nominated romance author who writes novels chock-full of smart women
and sexy men. She enjoys baking, Tweeting about boots, and listening to music
from the ’80s. Eva and her husband live in Southern California.