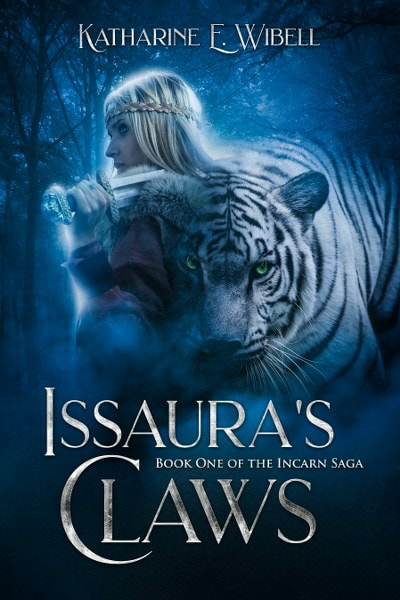 “According to legend, when the world was young, the goddess Issaura appeared among men. Those who treated her with kindness received the gift of the gods—the ability to transform into an animal form. This was a great honor but one that separated this race from other humans. Before Issaura departed the mortal realm, she promised to return if her people were ever at the point of destruction.
“Now a threat is rising from a land across the mists of the ocean, a threat that will push this race to the brink of extinction. Responding to the call to war, seventeen-year-old Lluava heads off to find her destiny, one that will carve her name in history.”
The Kingdom of Elysia consists of two races: the dominant race of humans and the native race of Theriomorphs who can shift into animal form. Although law dictates equal treatment, they neither like nor trust each other. Now brutal and ruthless Raiders are approaching; there is only one chance to defeat them. An army must be raised and trained. An army where each human will be paired with a Theriomorph partner. An army that must fight as one to defeat their common enemy.
Women are not warriors. However, Lluava is not like other women – human or Theriomorph. Her animal form is a magnificent beast whose power and fury she must learn to control. Although Lluava endures intense physical training and strives to overcome the doubts of the male recruits, she faces an unexpected adversary in the commanding general who seeks to break both her spirit and her body.
At the paring ceremony, Lluava is humbled when presented with a unique and ancient weapon. Yet she becomes distraught and angry when her human partner is revealed. If they fail to trust each other, the consequences will be devastating. Death and destruction are on the horizon and time is running out.
The Incarn Saga is a young adult fantasy series inspired by ancient myths, filled with fast-paced action and adventure, and enriched by an understanding of animal behavior that defines the shape-shifting Theriomorphs.
Goodreads * Amazon

How did you come up with the concept and characters for the book?

A number of personal experiences inspired me to write Issaura’s Claws and The Incarn Saga series. In college, I pursued a degree in animal psychology, aka animal behavior, in addition to pursuing a degree in art. I had always wanted to understand the sounds and body language of animals. In that same vein, I become a licensed wildlife rehabilitator for the state of Georgia and worked directly with wild animals. Immediately after college, I apprenticed with a dog trainer. That was followed by an internship at the Audubon Zoo in New Orleans.

As a result of these experiences, I envisioned a race of people known as Theriomorphs that can transform into animal forms. Even when Theriomorphs are in human form, various animal characteristics, both physical and psychological, are evident. For example, Yamir, a ruddy-skinned youth who spikes his hair and seems to get stuck in uncomfortable situations, has an animal form of a porcupine. The protagonist, Lluava, has a dual form of a white tigress. Physically, she has platinum blond hair yet very black eyebrows. She is fierce, brave, strong, and more than a little hot-tempered.

The second major inspiration is my ongoing study of the Vikings. Being of Swedish descent, I am drawn to this historical people and enjoy researching Viking history, culture, weapons and warfare, even common misconceptions. The more I learn, the more I appreciate and respect their often unacknowledged influence on the world. As a result, certain traits of the villainous Raiders who threaten to destroy the kingdom of Elysia are drawn from the Vikings.

The third important influence is mythology. As long as I can remember, I have collected anthologies of world legends and myths as well as encyclopedias of beasts and beings. A minor theme in Issaura’s Claws compares the human race’s monotheistic beliefs with the Theriomorph race’s polytheism. Ancient Egyptian religion along with the Greco-Roman pantheon inspired both my creation of the twelve Theriomorph gods and goddesses and their relationships with one another.

Finally, I feel strongly about unwarranted prejudice toward those different from oneself. Throughout the series, I point out how racism, religious persecution, and sexism affect the relationships between the ruling human race and Theriomorph society. In Issaura’s Claws, Raiders attack the kingdom. If both humans and Theriomorphs cannot overcome their differences, learn to trust each other and work together, they will surely succumb to their shared enemy.

In the following books, these influences and issues still prevail. The dynamic of the later novels do take a darker turn and become more violent and gritty. Throughout the series, readers will clearly see how animals, Vikings, mythology, and of course the uphill battles against prejudice still take predominant roles.

“According to legend, when the world was young, two gods of war — one male, one female — were destined for each other. Yet Ullr, forever unfaithful, lost the love of Issaura, his true match, and was forsworn. His violent anger and bitter rage grew and intensified, poisoning all creation and humanity.
Now that the Raiders’ long ships have faded from sight, the kingdom of Elysia is beginning to recover from the summer’s war with the brutal invaders from across the sea. Yet darker forces have taken root, forces that can alter the future of the land and its people in unthinkable ways. Seventeen-year-old Lluava must discover the means to prevent her world from collapsing. But in doing so, will she succumb to that darkness?”
Goodreads * Amazon

“According to legend, when the world was young, Crocotta, Queen of the Gods, discovered her mate’s faithlessness. She vowed to prevent future threats to all matrimonial pacts henceforward, but for her it was too late. The child born from the illicit coupling was a warrior goddess—one whom Crocotta would seek to destroy throughout eternity.
Now that the Raiders’ elite army is threatening the kingdom of Elysia’s northern borders, seventeen-year-old Lluava must leave the familiarity and safety of her native land to venture into the wilderness. Her mission is to discover others like her who will come to Elysia’s aid; her hope is to unravel the secrets behind what it means to be Incarn. But what she finds could destroy everything.”
Lluava’s story continues in Crocotta’s Hackles, the third book in The Incarn Saga’s award-winning new-adult series.
Goodreads * Amazon

Katharine Wibell’s lifelong interest in mythology includes epic poetry like the Odyssey, Ramayana, Beowulf, and the Nibelungenlied. In addition, she is interested in all things animal whether training dogs, apprenticing at a children’s zoo, or caring for injured animals as a licensed wildlife rehabilitator. After receiving degrees from Mercer University in both art and psychology with an emphasis in animal behavior, Wibell moved to New Orleans with her dog, Alli, to kick start her career as an artist and a writer. Her first literary works blend her knowledge of the animal world with the world of high fantasy.
Website * Facebook * Twitter * Instagram * Pinterest * Goodreads