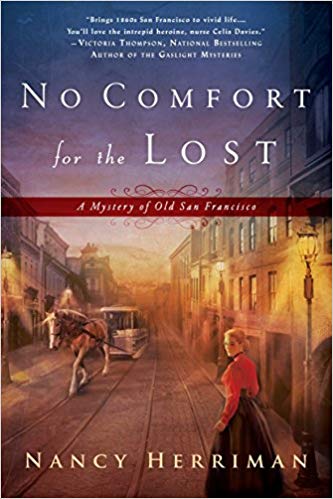 On Monday, Nancy Herriman, the author of No Comfort for the Lost, did an author interview with me. I am very grateful that she stopped by! Be sure to check out what she had to say.

I recently checked out the first book in Nancy Herriman’s new mystery series set in old San Francisco, No Comfort for the Lost. It was pretty good and I will probably keep reading the series as it comes out.

The description of the book and the new series is as follows:

After serving as a nurse in the Crimea, British-born Celia Davies left her privileged family for an impulsive marriage to a handsome Irishman. Patrick brought her to San Francisco’s bustling shores but then disappeared and is now presumed dead.  Determined to carry on, Celia partnered with her half-Chinese cousin Barbara and her opinionated housekeeper Addie to open a free medical clinic for women who have nowhere else to turn. But Celia’s carefully constructed peace crumbles when one of her Chinese patients is found brutally murdered…and Celia’s hotheaded brother-in-law stands accused of the crime.

A veteran of America’s civil war, detective Nicholas Greaves is intent on discovering the killer of the girl, whose ethnicity and gender render her as powerless in death as they did in life. Nicholas’s efforts are complicated by Celia, who has a knack for walking into dangerous situations that may lead to answers…or get them both killed.  For as their inquiries take them from Chinatown’s squalid back alleys to the Barbary Coast’s violent shipping docks to the city’s gilded parlors, Celia and Nicholas begin to suspect that someone very close to them holds the key to a murderous conspiracy…

I recently left my heart in San Francisco, so I’ve been looking for a good Victorian San Francisco mystery series. I was very excited when this one was recommended to me.

The book was pretty good, much better than M. Louisa Locke’s series. Celia and Nick are realistic and likable. You care what happens to them. The quality of the writing is very good. The mystery is a little weak. I don’t think it leads you to the denouement very well, but the story keeps you going. It is not quite as good as Victoria Thompson’s Victorian mystery series (the best written), but that is a high bar. Nick’s motive for solving the crime of a woman literally no one cares about (even Celia doesn’t care that much)  is not made clear, which I found annoying.

The biggest issue I have with the book is the fact that it centers around the murder of a Chinese woman in Chinatown and involves many Chinese characters but focuses on the white people who feel “burdened” with solving the crime. The view point is always that of a white person, either Celia or Nick. Very rarely are the problems that face people of color in literature told from the viewpoint of those people.

Now, I realize that this is the first of a series, so not every story will take place in Chinatown and focus on Chinese characters. The majority of the series will focus on Celia and Nick, the two white protagonists. Victoria Thompson’s series also has a book set in Chinatown, but that is long after the two main white characters (and, in fact, all of the central white characters) are established. For this first book to be set in Chinatown simply doesn’t feel right to me. The Chinese-ness of Chinatown is used as decoration for the primarily white central cast of the book. The only minor character in the series who will return and is a person of color is Celia’s half-Chinese cousin. It will be interesting to see how the cousin’s race continues to play out through the series, but for now, Chinatown and the Chinese are still very “other” and “over there.”

I long for the day that a Victorian mystery (especially one set in San Francisco) is told from the viewpoint of a Chinese woman.

Aside from the awkwardness I felt at the use of Chinese characters, I did enjoy the book. I think you can enjoy media and be critical of it at the same time, as I have said many times on this site. I would recommend this series and look forward to the next installment.

Have you read No Comfort for the Lost? What did you think?