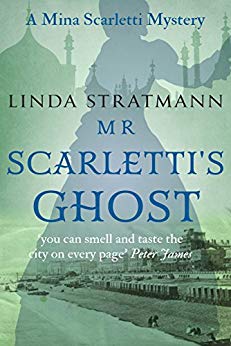 Psychics and mediums have become all the rage in fashionable Brighton. But can they really communicate with the dead?

Mina Scarletti, a local authoress, is sceptical. But when her recently widowed mother insists on hosting a séance, she agrees to take part.

Miss Eustace certainly seems convincing, and there is no doubt that she has amassed plenty of loyal followers, but why are the meetings always held in the dark? And why is her address kept a secret?

Plagued with doubts and concerned that her mother and her vulnerable friends may be falling prey to conmen and tricksters, Mina decides to investigate. Under the ploy of wishing to communicate with her dead father’s – Mr Scarletti’s – ghost, she leaves no stone unturned in her quest for the truth.

Is Mina right to doubt the spiritualists? Can she convince her mother she is being duped by a fraudster?

Can a mystery have no mystery and still be compelling? Apparently, yes. With no murder or no evidence of theft, Mina Scarletti sets out to reveal the true nature of the spiritualists plaguing her small English seaside town.

I once had a writing teacher tell me, “Only a murder is worthy of a three hundred page mystery.” Well, I wish I could remember which of my professors that was because I would send him this book. The heroine, setting, and writing are compelling enough that even if the spiritualists had proved to be genuine, I would not have left disappointed.

This book is unconventional in nearly every aspect of a cozy mystery, but that is what makes it so endearing. Mina has scoliosis, which is a defining aspect of her character. There is no murder, and no one claims any crime has been committed. The cast of characters is quite diverse for a Victorian mystery. And the writing is hilarious–if you enjoy dry British sarcasm, which I do.

I would highly recommend this book and I look forward to reading the rest of the series.

Have you read Mr. Scarletti’s Ghost? Let me know what you thought in the comments.