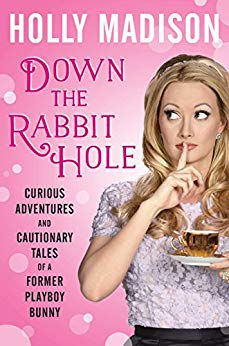 When I was 18, I married a 40-year-old man. That age difference isn’t quite as shocking as the 53-year age difference between former Playboy Playmate Holly Madison and Playboy mogul Hugh Hefner, but it was enough that I almost instantly connected with Madison as she shared her experience of living in the Playboy mansion in her memoir “Down the Rabbit Hole.”

I don’t read a lot of memoirs because it can be hard to connect to the author, but Madison is instantly likable. She is only about a year older than myself, so we have that in common as well. Madison really blows the lid off what many people perceive a Bunny to be. She is smart, funny, and self-aware enough that she could look back at her experiences with honesty.

I couldn’t put this book down. The Playboy Mansion is a place built on an image, and because Hef has built so many careers, it is hard to find people willing to speak out about what life is really like there. Madison’s story is shocking. I don’t want to give any spoilers, but I think anyone would be shocked and horrified at how Madison and the other Bunnies are treated there and by the Playboy company in general. However, the fact that she hasn’t been sued for defamation by Hef or Playboy means that her story is at least credible, if not completely true.

Madison’s story, though, isn’t just about tearing down Hef. I don’t think she paints him in as bad a light as she could have. This is Madison’s story, one that details her journey to herself. I think that older men prey on young women because we are too stupid to realize what is happening. By getting trapped in the Playboy life so young, Madison’s growth into the woman she could be was stunted. The story is about how she finally escaped from the rabbit hole and was able to become the person she was meant to be, and the rewards she finally found waiting for her. It is a happy ending, but Madison’s life is only just beginning.

It can be very hard for people to look back on their life and tell a story with the amount of objectivity the story requires. Madison says that at the depths of her depression, she knew that one day she would tell her story. However, she didn’t write her story at the height of her “Girls Next Door” fame or as soon as she escaped the mansion. She waited, and I think she waited long enough that she was able to get enough distance between herself and the events and she was mature enough to see what went wrong.

It took me a long time to get out of my former life as well. I am still coming to grips with how I ended up in that situation and I do my best to warn young women about falling into similar traps.

Holly Madison, thank you for waiting to write your story until you had the clarity and maturity to tell your story in the way it needed to be told.

Have you read “Down the Rabbit Hole?” What did you think? Let me know in the comments.